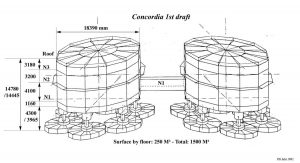 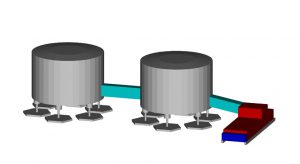 Concordia Station,  jointly constructed and administered by IPEV and the Italian Antarctic program ENEA-UTA, consists of one core of three ‘winter’ buildings flanked by a summer camp that also acts as an emergency station. All structures are on or above ground. Two of the three winter buildings are unique integral self-elevating buildings forming the station’s main living and working areas. The third winter building houses the main power plant and technical services. The summer/emergency camp and all peripheral structures are modular units set low to the ground and skid-mounted. These units can be towed away to avoid progressive burial by snow accumulation. 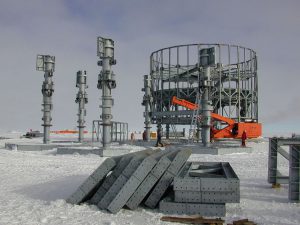 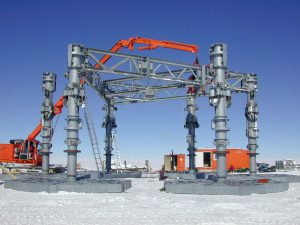 Technical systems use standard reliable technologies, able to be easily managed by the maintenance staff which change every year. Electric power is produced by only one of the three generator sets (2 of 250 KVA and one of 140). Engine heat (cogeneration) is recovered from the generators satisfying heating requirements. Annual fuel consumption is around 250 to 320 m3 of Diesel fuel to meet average electrical energy requirements of 110 kw and for heating of 75 kW. 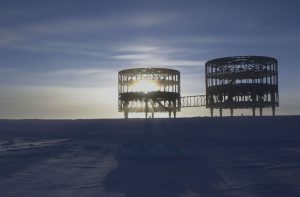 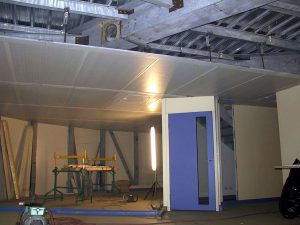 Each of the two self-elevating buildings is based on a roughly cylindrical body (18 sides) supported by six legs. Each leg sits on a large ‘footing’ pad spreading the load over the snow. Each leg can move up and down relative to the body of the building via hydraulic jacks. This allows the horizontality of the building to be adjusted but also to have the entire structure leap frog its way up over the ice as the ground level rises with snow accumulation. 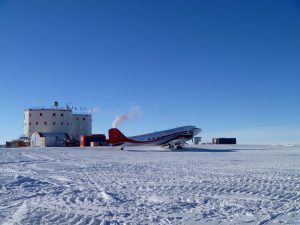 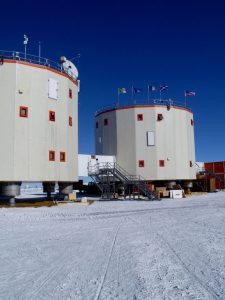 From its inception, the project has incorporated methods for reducing environmental impacts. Pollution risks have been minimized as much as possible, at least in accordance with SCAR, Antarctic Treaty and Madrid Protocol recommendations, with an additional emphasis on minimizing impacts on scientific observations. Exhaust gases are condensed to reduce water vapour; lubricant and other wastes are stored, then repatriated. 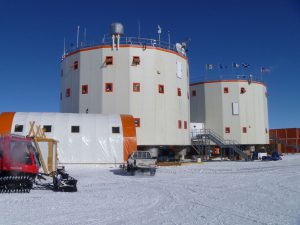 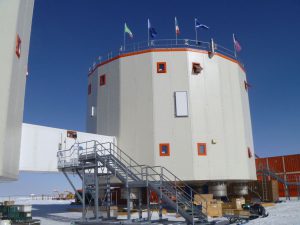 All waste water (both grey and black) is collected by two separate networks under vacuum and transferred to two treatment systems. Grey water is treated according to a specific 4 step process (ultrafiltration, nanofiltration and two stage reverse osmosis) from the European Space Agency (which also has an interest for its own requirements). Black water is treated by an aerobic fermentation / filtration unit. In due course water treated via this system will also be recycled. 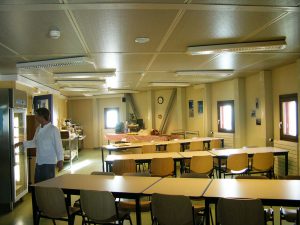 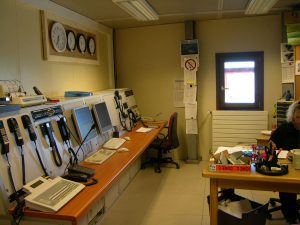