Unloading onto the sea ice in November / December 2017

The difficulties posed by the sea ice since 2011, in particular over the 2013-14 season, when for the first time since expeditions began on Terre Adelie there was no sea ice breakup with the advent of summer, have led us to review the whole operational process of the season’s commencement.

A first, successful, disembarkation onto the sea ice had been conducted in November 2014 (see tab re sea ice landing, November 2014). The following season, 2015-16, the sea ice dispersed over summer and it was possible to hope for a return to ice free summer seasons. This proved not to be the case, as ice breakup for the 2016-17 season was the most reduced since the period of regular access to Dumont d’Urville station. In fact, in 2016-17, the supply vessel was never able to get closer than 60 km to the coast, and this to the Eastern coast of the station. The Western coast never freed completely and was unsuitable for all navigation for the whole season.

Given this situation, and considering that helicopter transport has its limits, it was envisaged very early on, at the beginning of 2017, to revisit the November 2014 surface transport solution, but with increased safeguards. In fact if circumstances were to dictate disembarkation to the East, there would certainly be more river crossings (river = local break in the sea ice) than in November 2014. 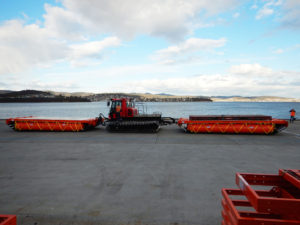 Building on the experience gained in 2014, when we used air cushioned sleds and flexible transport bladders, both because of their low ground pressure and excellent ability to slide on both flat terrain and sea ice, I suggested construction of a hybrid train composed of a Kassbohrer PB 300 snow groomer connected to two air cushioned sleds to support the vehicle, as shown in the side picture. The vehicle is connected at the front by the blade support plate. The plate remains manoeuvrable and can be adjusted at all times by the driver. At the rear, the vehicle is held by the miller arm. The assembly is designed to allow both rapid coupling and decoupling of components.

The ice melt did finally occur in the west (as well as in the east). The November sea ice edge formed at 49km from the station. Taking  advantage of a period of good weather, identification of rivers and safety checks consisting of testing the general thickness, were quickly conducted. Following the example of November 2014, an intermediary depot half way between the station and the vessel was created, placing 410m3 of fuel and 5 containers transferred in 10 days of work. The depot was then evacuated in the following week.

The sea ice melt progressed very slowly and the transfer system was used again on the following supply ship rotation at the end of December. Operations had commenced 43km offshore instead of 49, but a period of bad weather which occurred at the right time brought the edge of the floe to 13km from the station. Operations were able to be conducted in 5 days and once again 400 m3 of fuel was unloaded as well as 6 containers and bulk parcels not able to be transferred by helicopter. 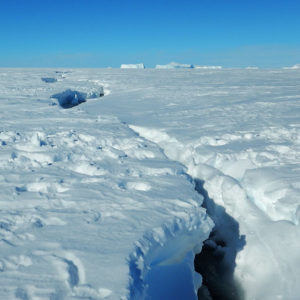 The snow groomer / inflatable cushion sled system has proven its efficacy for crossing rivers but also shown itself to be efficacious in permitting movement over the summer sea ice, traditionally saturated with meltwater from the surface snow layers. 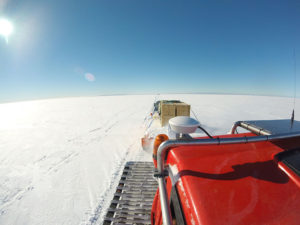