Dumont d’Urville station (66°40’ South / 140° East), is the first permanent French station on the Antarctic continent, constructed on Petrel Island in the Geologie Archipelago, 5 km off the coast of the Antarctic continent. The site was discovered during the first expeditions undertaken at the beginning of the 1950s, and selected for participation in the 3rd International Geophysical Year program – IGY. The structures built on that occasion were designed for temporary occupation and named the Dumont d’Urville Base.

At the end of the IGY, in 1959, the French government decided to maintain Dumont d’Urville, then extend it, then make it a permanent station for the pursuit of scientific programs.

Administered and driven by IPEV within the framework of the French Austral and Antarctic Lands Territory, the station can accommodate 35 persons in winter and 90 in the summer period. It includes some fifty structures: accommodation units, kitchen and refectory, generating plants, scientific laboratories, workshops and hospital. These facilities are adapted to the local conditions: temperatures from 0°C to – 40°C, blizzard, polar night, winds which can exceed 200 km/hr. Average electrical production is 90kw and potable water production is 4 m3/day. Average annual consumption of Diesel fuel is 350m3. 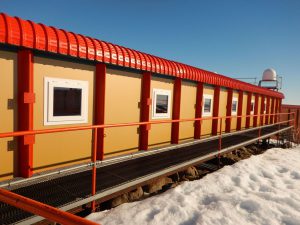 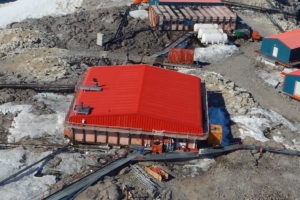 DDU_Roof repairs of the main building

Information on Petrel Island
Petrel Island is composed of Gneiss rock of disordered appearance with several Permafrost zones. About half its surface is frozen. Its dimensions are 900m at its longest and 550m at its widest. The central portion consists of a plateau of an average altitude of 40m, allowing good clearance in all directions favourable to scientific observations. 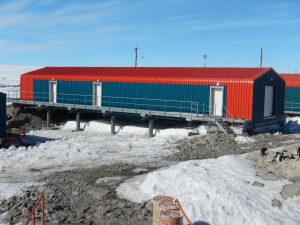 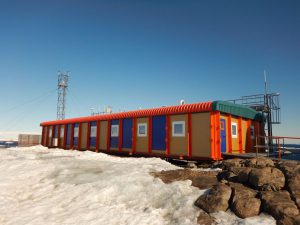